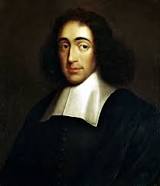 Baruch Spinoza was a Dutch philosopher of Portuguese Sephardi origin. One of the early thinkers of the Enlightenment and modern biblical criticism, including modern conceptions of the self and the universe, he came to be considered one of the great rationalists of 17th-century philosophy.

ALL THINGS EXCELLENT ARE AS DIFFICULT AS THEY ARE RARE.

PEACE IS NOT AN ABSENCE OF WAR, IT IS A VIRTUE, A STATE OF MIND, A DISPOSITION FOR BENEVOLENCE, CONFIDENCE, JUSTICE.

THE HIGHEST ACTIVITY A HUMAN BEING CAN ATTAIN IS LEARNING FOR UNDERSTANDING, BECAUSE TO UNDERSTAND IS TO BE FREE.

IF YOU WANT THE PRESENT TO BE DIFFERENT FROM THE PAST, STUDY THE PAST.

DO NOT WEEP; DO NOT WAX INDIGNANT. UNDERSTAND.

FEAR CANNOT BE WITHOUT HOPE NOR HOPE WITHOUT FEAR.

FREEDOM IS ABSOLUTELY NECESSARY FOR THE PROGRESS IN SCIENCE AND THE LIBERAL ARTS.

ALL HAPPINESS OR UNHAPPINESS SOLELY DEPENDS UPON THE QUALITY OF THE OBJECT TO WHICH WE ARE ATTACHED BY LOVE.

DESIRE IS THE VERY ESSENCE OF MAN.

BE NOT ASTONISHED AT NEW IDEAS; FOR IT IS WELL KNOWN TO YOU THAT A THING DOES NOT THEREFORE CEASE TO BE TRUE BECAUSE IT IS NOT ACCEPTED BY MANY.

Born in 1632 in Amsterdam to a modest Jewish family, Baruch Spinoza became one of the key figures of the seventeenth-century Dutch and European Enlightenment.

As a young man, he was considered an outstanding student of the Talmud and a promising religious scholar. But he soon found himself on the outside of the orthodox tradition due to his radical and unorthodox opinions. The influence of a new orientation, inspired by the philosophic writings of René Descartes and Francis Bacon, among others, could be seen at a very young age. In 1656 the Amsterdam rabbis excommunicated Spinoza. He lived the remainder of his life as a lens grinder while writing anonymously published philosophic treatises and covertly exchanging letters with many of the philosophically minded luminaries of the broader European Enlightenment.

Deeply concerned for the political future of Amsterdam and Europe, he published the Theologico-Political Treatise in 1670, which, among other goals, was intended to lend support to the secular and constitutional regime of Jan de Witt, the Grand Pensionary of the Netherlands. That same year he fled to the Hague, fearing persecution at the hands of a repressive faction led by the Prince of Orange. His name had become a great epithet in the war that ensued between the supporters of de Witt and those of the Prince; the Theologico-Political Treatise was said by the Prince’s followers to be “forged in Hell by a renegade Jew and the Devil, and issued with the knowledge of Jan de Witt.” When the de Witt brothers were murdered in 1672 by the Orange faction, Spinoza considered his life to be in great danger. He continued, nonetheless, to work closely with the Dutch mathematician and scientist Christiaan Huygens, who published major studies in mechanics, optics, astronomy, and probability. Spinoza died in relative peace in 1677 and was buried at the Hague.

Given the widespread censorship and persecution of philosophers and scientists during the seventeenth century, Spinoza exercised great caution in the publication of his unorthodox writings, signing many of his works and letters with the Latin word “caute,” meaning “be cautious.” The only work to be published in his own name in his lifetime was the early Principles of Cartesian Philosophy (1663), which served as a preparatory work for many of the metaphysical views in his Ethics.

Rather than being presented in a conventionally restrained manner, however, Spinoza’s work seemed intended to provoke controversy in Amsterdam and beyond. His teachings on the divine, on the psychological basis of prophecy, and on the limits of religious authority clearly challenged the claims of orthodoxy. Spinoza defended the philosophic life against religious persecution and argued for a new, liberal, democratic regime supportive of that life.

Spinoza’s radically democratic and liberal teaching came to symbolize the rising philosophic outlook that became a touchstone in the fiery religious and political controversies raging across Europe. In the century after his death, the epithet of “Spinozism” emerged as an accusation hurled against those who openly professed atheism, a materialistic metaphysics, and an advocacy of political liberalism.

Although Spinoza was often the subject of persecution as an atheist in his own day, his writings played an important role in shaping philosophy, theology, and politics in future centuries. Hegel, for example, claimed to his contemporaries, “you are either a Spinozist or not a philosopher at all.” Early political Zionists often invoked Spinoza, who had endorsed Jewish political self-reliance. His thought remains a landmark in the history of liberal constitutionalism, as it provides one of the clearest and most compelling defenses of free speech, democracy, and the dignity of the philosophic life.