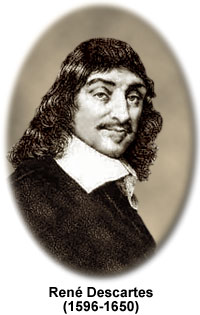 René Descartes is often credited with being the “Father of Modern Philosophy.” This title is justified due both to his break with the traditional Scholastic-Aristotelian philosophy prevalent at his time and to his development and promotion of the new, mechanistic sciences. His fundamental break with Scholastic philosophy was twofold. First, Descartes thought that the Scholastics’ method was prone to doubt given their reliance on sensation as the source for all knowledge. Second, he wanted to replace their final causal model of scientificexplanation with the more modern, mechanistic model.

Descartes attempted to address the former issue via his method of doubt. His basic strategy was to consider false any belief that falls prey to even the slightest doubt. This “hyperbolic doubt” then serves to clear the way for what Descartes considers to be an unprejudiced search for the truth. This clearing of his previously held beliefs then puts him at an epistemological ground-zero. From here Descartes sets out to find something that lies beyond all doubt. He eventually discovers that “I exist” is impossible to doubt and is, therefore, absolutely certain. It is from this point that Descartes proceeds to demonstrate God’s existence and that God cannot be a deceiver. This, in turn, serves to fix the certainty of everything that is clearly and distinctly understood and provides the epistemological foundation Descartes set out to find.

Once this conclusion is reached, Descartes can proceed to rebuild his system of previously dubious beliefs on this absolutely certain foundation. These beliefs, which are re-established with absolute certainty, include the existence of a world of bodies external to the mind, the dualistic distinction of the immaterial mind from the body, and his mechanistic model of physics based on the clear and distinct ideas of geometry. This points toward his second, major break with the Scholastic Aristotelian tradition in that Descartes intended to replace their system based on final causal explanations with his system based on mechanistic principles. Descartes also applied this mechanistic framework to the operation of plant, animal and human bodies, sensation and the passions. All of this eventually culminating in a moral system based on the notion of “generosity.”