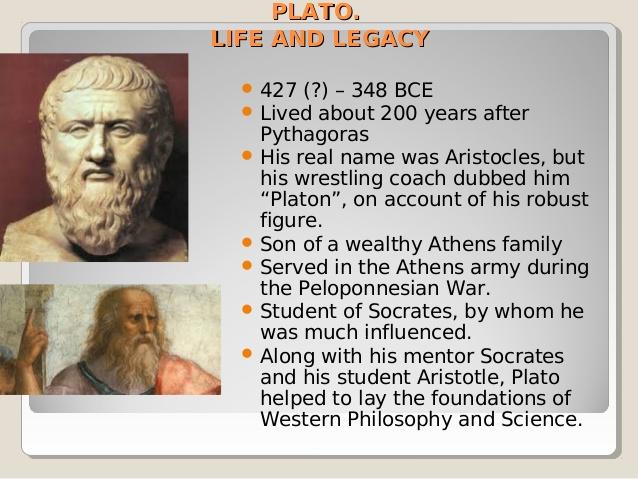 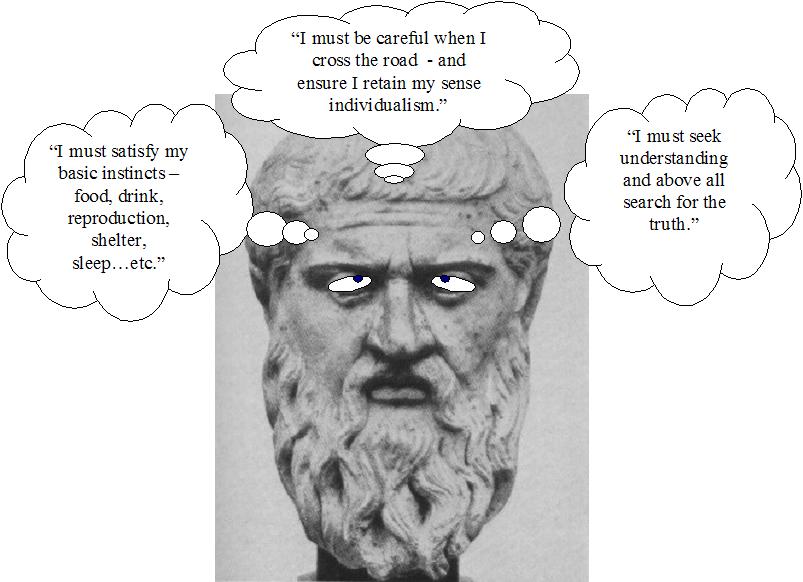 Plato (427-347 BCE) was born into a wealthy and noble family in Athens. He was preparing for a career in politics when the trial and eventual execution of Socrates (399 BCE) changed the course of his life. He abandoned his political career and turned to philosophy. He opened a school on the outskirts of Athens dedicated to the Socratic search for wisdom. Plato's school was known as the Academy. It is generally regarded as the first university in western history. It remained open from 387 BCE until when it was eventually closed by the Christian Emperor Justinian I in 529 CE.

Unlike his teacher Socrates, Plato was both a writer and a teacher. His writings are in the form of dialogues. In these dialogues Plato places Socrates as the principal speaker. It is therefore sometimes difficult to know where Socrates' philosophy ends and Plato's begins.

Plato's most famous teaching is known as the Allegory of the Cave. It can be found in Book VII of Plato's best-known work, 'The Republic'. In the Allegory Plato described symbolically the predicament in which mankind finds itself and proposes a way of salvation. The Allegory presents most of Plato's major philosophical assumptions:

The Republic is really a dialogue on justice. It is often regarded as a utopian blueprint for society. The Republic is dedicated toward a discussion of the education required of a rulers - the so-called "Philosopher-Kings".

Each part of the mind not only has the ability to desire but also some cognitive ability. For example in the desire to quench one’s thirst there is the cognitive ability to recognise a drink. Plato talks about the ‘non-rational’ parts of the mind having beliefs or views. It is the job of reason to perceive goodness. It is the unsullied rational part which perceives and knows what is good for a person. Other parts recognise goods which are more restricted i.e. goods which are short term or non-altruistic. Such parts are limited to calculating how to achieve them.

Plato believed that one could be ‘ruled’ by a part of a mind. To perceive goodness is to act on it.

In short the three divisions are:

Firstly, starting with desire, he notes that it may be either unqualified or qualified. For example, someone may thirst without qualification – not caring about what or how much they want to drink. In this case drink is the ‘natural object’ of thirst. But thirst may also be qualified. Someone may desire a lot or a little to drink. Likewise, someone may desire a particular kind of drink and so can be said to have a particular kind of thirst. Plato concludes that there is an ‘irrational’ element to the soul which desires the drink, and a ‘reflective’ element which categorizes it as little or much, sweet or bitter, and so on.

Secondly, Plato notes that children are able to exercise a degree of self control long before they have the rational. He calls this element ‘spirit’ or ‘indignation’. This third element comes to the help of the reason when it is struggling against desire. Plato compares the rational element to a charioteer trying to control two horses, one good (the spirited element), the other bad (the appetitive element). The first horse is obedient to the charioteer’s instructions while the other has to be restrained by the whip. Indignation is distinct from appetite while at the same time having an affinity with reason. Plato warns that indignation may become corrupted by bad upbringing.