Persian lyric poet Hafiz (born Khwāja Šamsu d-Dīn Muḥammad Hāfez-e Šīrāzī) grew up in Shiraz. Very little is known about his life, but it is thought that he may have memorized the Qur’an after hearing his father recite passages. When his father died, he left school to work at a bakery and as a copyist. Hafiz became a poet at the court of Abu Ishak and also taught at a religious college. He is one of the most celebrated of the Persian poets, and his influence can be felt to this day. As the author of numerous ghazals expressing love, spirituality, and protest, he and his work continue to be important to Iranians, and many of his poems are used as proverbs or sayings.

Hafiz’s tomb is in Musalla Gardens in Shiraz.

His father, Baha-ud-Din, is said to have been a coal merchant who died when Hafez was a child, leaving him and his mother in debt. It seems probable that he met with Attar of Shiraz, a scholar, and became his disciple. He is said to have later become a poet in the court of Abu Ishak, and so gained fame and influence in his hometown. It is possible that Hafez gained a position as a teacher in a Qur'anic school at this time.

In his early thirties, Mubariz Muzaffar captured Shiraz and seems to have ousted Hafez from his position. Hafez apparently regained his position for a brief span of time after the Shah Shuja attempted to regain the throne. But shortly afterwards, Hafez was forced into self-imposed exile when rivals and religious characters he had criticized began slandering him. Another possible cause of his disgrace may have been a love affair he had with a beautiful Turkish woman, Shakh-e Nabat, about whom Hafez wrote a number of romantic poems. Hafez fled from Shiraz to Isfahan and Yazd for his own safety.

At the age of fifty-two, Hafez once again regained his position at court, and possibly received a personal invitation from Shah Shuja, who pleaded with him to return. He obtained a more solid position after Shah Shuja's death, when Tamerlane ascended to the throne.

It is generally believed that Hafez died at the age of 69. His tomb is located in the Musalla Gardens of Shiraz, Iran, and remains a popular tourist destination, with millions of Persians and other visitors making the pilgrimage to Hafez's tomb each year.

Hafez, unlike most artists, obtained immense fame and fortune during his lifetime. Never one to be particularly humble, he wrote his own epitaph:

I have never seen any poetry sweeter than thine, O Hafez,

I swear it by that Koran which thou keepest in thy bosom.

There is no definitive version of his collected works (or diwan); editions vary from 573 to 994 poems. Only since the 1940s has a sustained scholarly attempt been made—by Mas'ud Farzad, Qasim Ghani and others in Iran—to authenticate Hafez's work and remove errors introduced by later copyists and censors. However, the reliability of such work has been questioned, and in the words of Hafez scholar, Iraj Bashiri, "there remains little hope [in Iran] for an authenticated diwan."

Although denounced by orthodox and fundamentalist Muslims in his own time as a hedonist who indulged in the pleasures of earthly world, Hafez greatly influenced subsequent Persian poets. In time, many critics would point out that what appears to be reckless hedonism in Hafez's works is in fact an allegory for the unspeakable ecstasy of spiritual experience.

In translation, Hafez has left his mark on a number of important Western writers of the nineteenth century, such as Goethe. His work was first translated into English in 1771, by William Jones. Few English translations of Hafez have been truly successful. His poetry is notoriously ambiguous. Interpreting him requires care and scholarship; the search for his words' literal and symbolic meanings, all of which is notoriously difficult for Western scholars studying a now ancient form of the Persian language. Additionally, Hafez often refers to contemporary events and figures without providing any background; his poetry assumes implicitly that the reader has a thorough understanding of Persian literature and history. Much Hafez scholarship continues to focus on explicating all the allusions in his works.

The meaning behind the poetry of Hafez is incredibly difficult to explicate. Hafez was a master of irony. In any event, many of his poems were intentionally vague. Much like the Symbolist poetry of nineteenth century Europe, Hafez sought to disassociate the reader from ordinary meaning and sense in order to force the reader into a state of confused ecstasy. As the poet himself had said:

Am I a sinner or a saint,

Which one shall it be?

Hafiz holds the secret of his own mystery...

One of Hafez's greatest fondnesses was for wine, so when the Muzaffarids captured Shiraz in 1353, instituting a prohibition, it was no surprise that Hafez wrote a mournful elegy for the loss. The elegy, one of Hafez's finest poems, is notable for its unusual shift in tone; although Hafez appears, at the beginning of the poem, to merely be a drunkard mourning the loss of his alcohol, it becomes apparent by the poem's final line that he also, paradoxically, embraces the opportunity to be abstinent in order to obtain spiritual piety:

Though wine gives delight, and the wind distills the perfume of the rose,

Drink not the wine to the strains of the harp, for the constable is alert.

Hide the goblet in the sleeve of the patchwork cloak,

For the time, like the eye of the decanter, pours forth blood.

Wash the wine stain from your devish cloak with tears,

For it is the season of piety, and the time for abstinence.

Much like the poems on wine, Hafez also wrote a number of ghazals on the traditional topic of romantic love. For Hafez, however, love was often a medium to a higher state of ecstasy than mere human passion. His poems, as in the following sequence, use love as a metaphor for the kind of transcendental passion felt by the devout in search of the divine:

I said I long for thee

You said your sorrows will end.

Be my moon, rise up for me

Only if it will ascend.

I said, from lovers learn

How with compassion burn

Beauties, you said in return

Your visions, I will oppose

My mind's paths, I will close

You said, this night-farer knows

Another way will descend.

With the fragrance of your hair

I'm lost in my world's affair

You said, if you care, you dare

On its guidance can depend.

I said hail to that fresh air

Cool is that breeze, you declare

With beloved's air may blend.

I said, your sweet and red wine

Granted no wishes of mine

You said, in service define

Your life, and your time spend.

I said, when will your kind heart

Said, speak not of this art

Until it's time for that trend.

I said, happiness and joy

Sorrows too will end my friend.

I have learned so much from God

a Christian, a Hindu, a Muslim, a Buddhist, a Jew.

The Truth has shared so much of Itself with me

Love has befriended Hafiz so completely.

It has turned to ash and freed me

Of every concept and image my mind has ever known.

The works of Hafez are inspired by the Sufi teachings of his time, in which passionate love and the drinking of wine are metaphors for ecstatic religious states that cannot be otherwise described. Although Hafez's poetry was often misunderstood by conservative Imams in his own lifetime, in the centuries following his death, his poetry became celebrated by Muslims, Hindus, and Christians alike for its profound insights into the search for spiritual meaning.

Tomb of Hafez is one of the cultural attractions of Shiraz 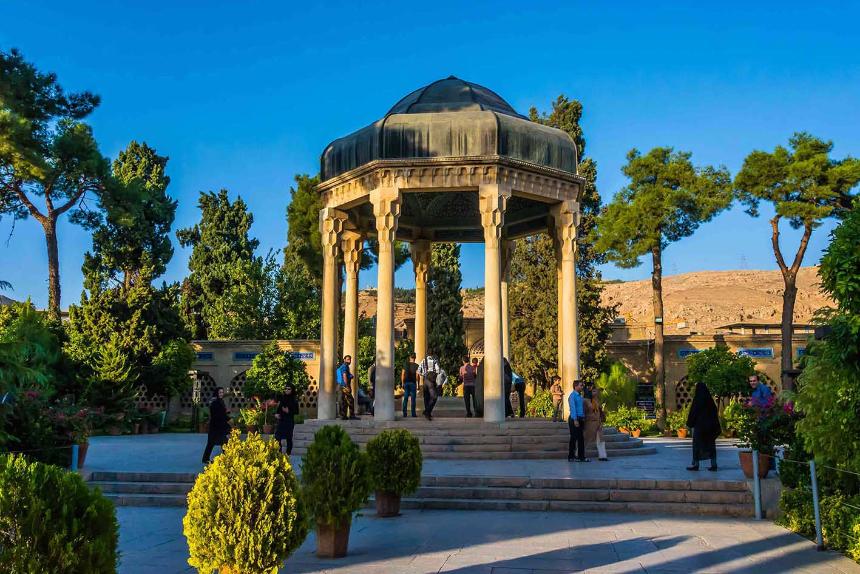